Lightroom has a handy red eye and pet eye fix tool but often, at least for me, it seems like pointing in a finishing nail with a sledge hammer the results are just too heavy handed.  I ran across a couple of approaches on the inter webs and found one at digital-photograpy-school.com that inspired me to create my own step by step.

Before going into the step by step, I want to spend a few bits on understanding what the problem is, which I think helps to make my approach make more sense.

Everyone has seen red-eyes in photographs, those shots where people or certain animals, have demonic red pupils. It is caused by the bright light from a flash reflecting off the inside of the eye. Photographic flashes are too fast for the eye to react and reduce the size of the pupil allowing a significant amount of light to pass through to reflect and leave the eye for the camera to record.  The color of this reflection is largely determined by the physiology of the eye.  Differences between species explain why some creatures have "red" eyes, some "white" and others "blue" or "green" when subjected to a bright flash in relatively dim lighting.

One way to minimize this problem is to use a camera's red-eye flash setting.  This setting causes a relatively low powered light pulse to immediately precede the actual flash. This approach causes pupils to contract and greatly reduces red-eye.  It is, of course, something that must be done when shooting and is sometimes rather annoying during a shoot.

Too often in flash shots, "red-eye" becomes a problem that needs to be fixed in port-production. Many photo editing programs have an "auto" fix of some type that can be used to quickly alter the red-eye effect. The built in tools typically help, but leave an image not looking right.

Below is an image with mild "white-eye" and a "fixed" image created in Lightroom:


Neither the original nor the lightroom adjusted shot are terrible, but they just don't look right.  As this is a shot of my daughter's pup that I think she might really like, I want it to look better. A portion of the end result is shown below.

Looking at the original, there are really two problems with the eyes, both of which can be repaired directly in Photoshop:


The color cast can be removed by desaturating a portion of the image.  The pupils can be adjusted by using the levels filter.  In both cases, leaving a little bit of the problem results in a more natural image. The following shot is a portion of my photoshop corrected picture.

2. Zoom in on the eye or eyes so they can be easily selected.

3. Create a layer mask for the adjustment layers to be created that shows only the pupil(s) being adjusted.

Many techniques work to create such a mask.  Following is what I used. 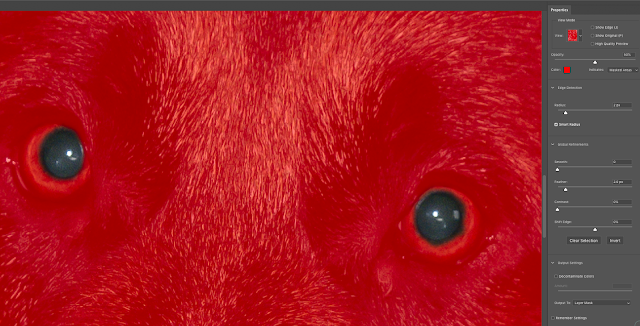 Push the saturation down, that is to the left to reduce the amount of color in the area revealed by the layer mask.  This should remove the excess color tint in the pupil leaving a mostly grey tone in the affected area.

Repeat the process used in step 5 to create a Levels mask in addition to the saturation adjustment. Duplicate the layer mask by holding the Option key down while dragging the mask onto the new layer. 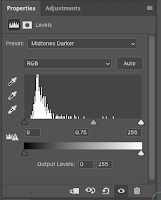 The levels controls can now be used to darken the midtowns to make the grey tone in the pupil considerably darker, but not black.  This allows for a natural looking result with a very dark but not onyx pupil.

An easy way to accomplish this is to set the Preset selection to Midtowns Darker as shown in the included screen grab.  The middle arrow can be nudged from the preset value to further adjust the appearance.

At this point the eyes should be "fixed" if they aren't quite right, go back and adjust the mask, saturation and/or levels adjustments to your satisfaction.  You may want to flatten the image (Layer/Flatten Image) to lock the change in and then save the file.

My finished image can be seen here: Barrett Photo

Email ThisBlogThis!Share to TwitterShare to FacebookShare to Pinterest
Labels: Photography