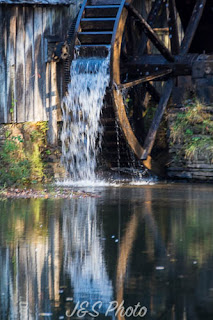 This is old hat to many photographers, but the use of shutter speed to freeze flowing water is something worth understanding even at the risk of repeating what might be obvious.

Water in motion can make striking images.  Our eyes naturally blend the motion of falling water drops and make water falls / rapids into silky ribbons of water even when they are actually individual droplets of water.  A camera can freeze that motion, or allow it to flow, it all depends on the shutter speed.

The accompanying shot of the water wheel was shot at 1/50 of a second.  This allowed the water to move a short distance during the exposure and blurring, but not forming a long smooth silky fall.  In this case, I wanted the water to show motion, to make the shot feel like it's in motion, but I wanted the spokes of the wheel to be relatively sharp, nearly frozen in time. That's what I was seeing when I looked at the scene and that shutter speed (on a tripod, BTW) was just right.

I have two pairs of images that illustrate the effect, both taken at a fountain in Cuzco, Peru. 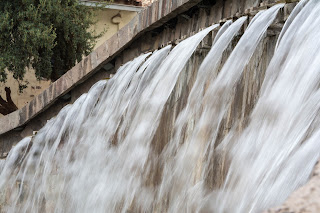 A close up of the flowing water makes the effect clear.  The fist of the images shows the flowing water as silky ribbons, the effect of a "slow" shutter speed. The definition of slow depends on the speed of the object in motion. In this case the iamge was captured at 1/40 of a second.  The aperture was stopped way down, at f25, Slow enough to blur the water, but fast enough to still allow a hand held shot.

The second image freezes individual water droplets while still allowing a bit of motion to render the major water flows as sheets of water. This exposure was taken at 1/500 of a second, at f7.1. 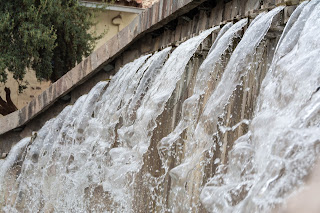 A secondary effect can be seen in the different dpeth of field in the two shots.  The image with blurred water has sharp focus throughout the image, while the faster shot had a slight blur on the background.

While I typically like falling water to be silky smooth, I like the second image in this pair better. 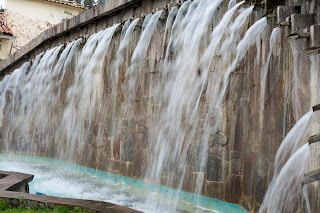 This pair is slightly wider, but very similar.  The first image was taken with a shutter speed of 1/25 of a second and an apeture of f25. This allowed a blurring of all of the water in motion and sharp focus throughout. 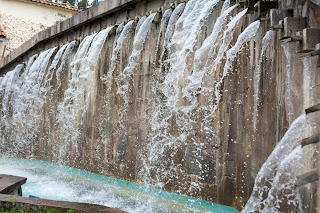 Different framing of the scene has eliminated the tree, which when in sharp focus can be distracting, as in the first pair.


The second image was taken with a much faster shutter speed, 1/2000 of a second to really freeze that moving water. That high of a shutter speed forced the lens wide open, f4, blurring the background and foreground noticeably when compared to the first image of this pair.

I'm not crazy about either of image in this pair. They feel like they are at an uncomfortable distance, I'd like to have had this shot from further away, then the silky water cold look better when contrasted with other objects in clear, stationary, focus.

Posted by BarrettJG at 9:06 AM

Email ThisBlogThis!Share to TwitterShare to FacebookShare to Pinterest
Labels: Photography